12 majWARSAW’S SECRETS – BEYOND THE TOURIST SPOTS

Warsaw is a strange city – as most tourists never really leave the Old Town and the Royal Route, it would seem that being anywhere else makes ‘blending in’ with the locals and exploring ‘real’ Warsaw easy-peasyy. But, given the city’s size, it may be tricky to know which areas to explore. Lo and behold, Orange Umbrella guide comes to your rescue! *drumroll* Here is my personal list of some of the places or sites worth your time.

One of the most typically Varsovian sites are well-like courtyards of pre-war tenement houses you will find in Śródmieście (city center) and Praga districts. With a single gate for entry/exit and all inner windows facing the yard, inhabitants of these buildings were (and still are!) able to monitor all activity of their neighbors and house visitors. And the well comparison doesn’t come out of nowhere – the sound carries from the courtyard up as if you were standing at the bottom of the well. Bear this in mind in your meanderings!

Historically, any visitors would be allowed to enter the courtyards – street orchestras (who would play until you dropped enough money for them to leave), vendors and curious shoppers – one courtyard (at al. Jerozolimskie 49) is still home to an original 1904 stereoscope, which offered a 3D visual experience before the movies were invented.

Sadly, more and more of these courtyards are being sealed off from the city by housephone-protected gates, but many host companies or institutions that accept visitors during daytime. My tip: try ringing up the various businesses or sneak into any courtyard with an open gate!

Those that are bound to be accessible include the courtyards boasting surviving ghetto wall fragments at ul. Złota 62 & Sienna 55, the beautiful courtyard of ul. Szpitalna 8 (Pies czy Suka inside is one of the fanciest cocktail bars in the city) and the one next door at ul. Szpitalna 6 (look for street art and fashion label Risk.Made in Warsaw). Courtyard at no.22 of Praga’s ul.11 listopada is home to a number of bars and clubs. And last but not least – visit one of my favorite buildings in Warsaw, edifice of the Warsaw University of Technology at pl. Politechniki 1, and head inside – you’ll quickly see why the astounding inner courtyard serves as a ballroom for the city’s high-life. 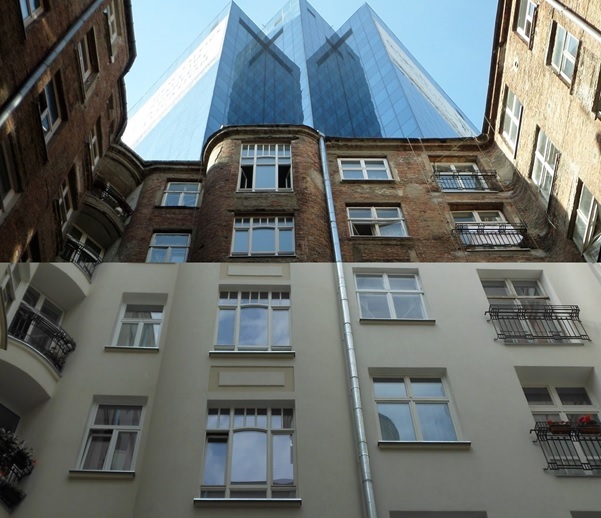 There are many, many more courtyards to see, so seek them out! Some street suggestions for individual explorations: ul.Mokotowska around pl. Trzech Krzyży and ul.Emilii Plater in the city center as well as ul. Ząbkowska and ul. Wileńska in Praga.

In many Asian cultures, having a house shrine is nothing out of the ordinary. Here in Warsaw, you may stumble upon little shrines inside courtyards of pre-war tenements or on street corners and wonder about the goddess they’re devoted to. *Blasphemy!* Of course it’s the Holy Mary, who in Poland is seen as a mediator between God and the common Catholic. 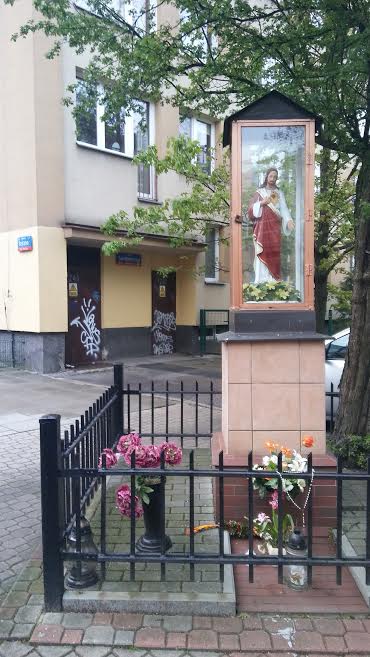 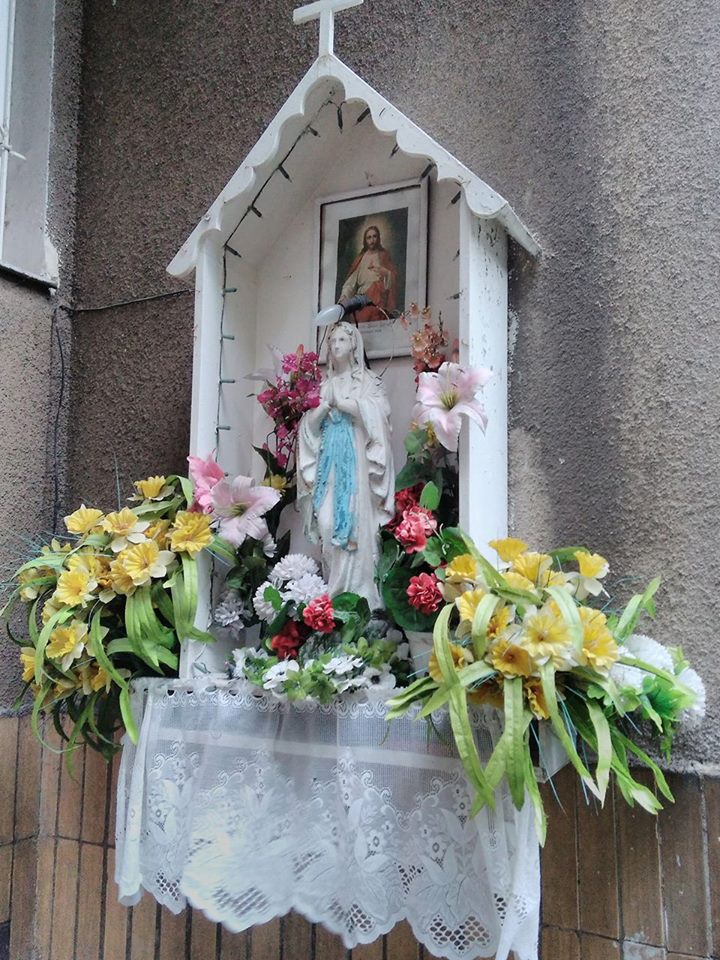 Most of the courtyard/streetside shrines in the city were erected during World War II, when Catholic masses would be held for residents in the afovementioned courtyards for safety reasons and because of the police hour/curfew. Many of the houses in Śródmieście (city center), Ochota and Praga districts still have little statues of Virgin Mary (less often, her Son) adorned with flowers and candles.

Check the courtyards at ul. Ząbkowska and Kępna in Praga for a selection. For a list of various shrines and roadside crosses in Warsaw, click here.

One of the shrines in a Mokotów courtyard;
photo credits: Olga Mysłowska

Jesus road chapel at the corner of ul.Sandomierska and Rejtana in Mokotów; photo credits: Gosia Nowicka

Did you know that gas lanterns, which debuted here in 1844, still line some of Warsaw’s streets? A municipality employee is responsible for lighting them up each evening and putting them out at dawn-break. The light they give off is warmer and less intensive than that of electric lightbulbs. The easiest location to find is ul.Agrykola, heading downhill from NA ROZDROŻU square. Wandering down this little street towards the entrance of Łazienki Royal Park after sundown is probably Warsaw at its most romantic. My tip – pass the park entrance and spend a few minutes marvelling at the view of the Palace on the Water.

This is what Palace on the Water in Łazienki looks like at night from the perspective of ul.Agrykola. I even saw one guy get down on his knees to propose here once, no wonder! 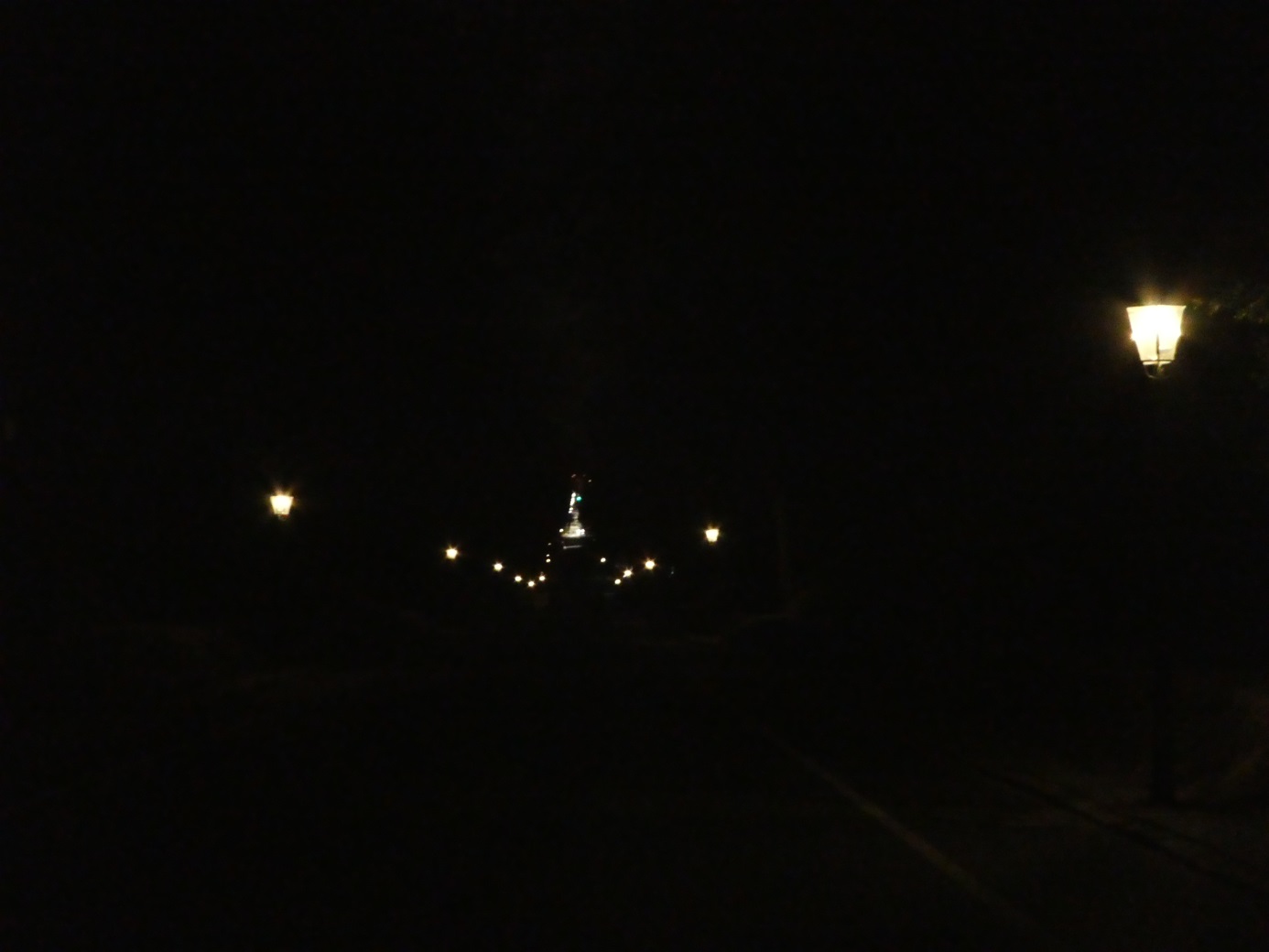 Other gas lantern locations include ul.Płatnicza in Bielany district (one of the city’s most charming little streets, but that’s another story) and ul.Okrężna in Sadyba.

To get to ul.Agrykola, take any bus down the Royal Route to PL.NA ROZDROŻU stop, then cross the Royal route and turn left.

Żoliborz is a pre-war district that got its name from being beautifully located on the riverside (in French, jolie bord means beautiful riverbank, I am told). Its homes and tenement houses were built for army officers, administrators, professors, journalists – all these professions are still overrepresented here, augmented by a population of anyone rich enough to afford a prewar apartment or house. Once it gets warm (i.e. from May 6 to end of September this year), breakfast market on al.Wojska Polskiego/corner of ul.Śmiała is a big draw each Saturday, but I would encourage you to cross the main thoroughfare of ul. Mickiewicza and head into tiny side streets of Wieniawskiego, Wyspiańskiego and Niegolewskiego toward pl. Wilsona (Wilson’s Square).

One of the mansions at ul.Wieniawskiego 1, photo credits: Wikipedia.org

Built in the early 1900s, many of these houses look like taken out of history books (mansions at ul.Wieniawskiego) or modernist architecture textbooks
(ul. Suzina and ul. Mierosławskiego 10). You will need less than an hour and a map to walk around the neighbourhood. Blue subway line (M1) gets you here from city center – take the train towards Młociny and get off at PL. WILSONA.

Below you’ll find a map with the most interesting spots marked:

Text: Gosia Nowicka
We’re Orange Umbrella. We run free tours about Old Town, WW2, Jewish Warsaw, Alternative Praga and last but not least Best of Warsaw.
We’re locals who are passionate with their city. This blog is where we share our hints with you.